Justin Blanchard is an American actor, director, producer and teacher. He has performed professionally in theatre, television, film, and audiobooks. He graduated from NYU’s Tisch School of the Arts with a B.F.A. in Drama and continued his training at the Brown University/Trinity Rep Acting Program, obtaining a Master of Fine Arts in Acting. He is a member of the Actors Equity Association (AEA) and the Screen Actors Guild/American Federation of Television and Radio Announcers (SAG/AFTRA).

Mr. Blanchard made his professional acting debut starring on Broadway in the acclaimed production of Journey’s End at the Belasco Theatre. Journey’s End received a Tony Award, Drama Desk Award, Outer Critics Circle Award, Drama League Award and a special citation from the New York Drama Critics Circle for Best Revival of a Play (2007). Since then he has performed major roles in over a dozen new and classic plays with Fiasco Theater Company (Iachimo in Cymbeline), Ma-Yi Theatre Company (Jesus in Jesus In India), Shakespeare Festival St. Louis (Iago in Othello, Lysander in Midsummer Night’s Dream), Theatre for a New Audience (Malcolm in Macbeth; Nearchus in The Broken Heart), Red Bull Theatre (Frank Thorney in The Witch of Edmonton, Jasperino in the The Changeling), Long Wharf Theatre (Chester in world premiere of Paula Vogel’s A Civil War Christmas), McCarter Theatre Center (Jacob Marley in A Christmas Carol), Berkeley Repertory Theatre (Hylas in world premiere of Mary Zimmerman’s Argonautika), Actors Theater of Louisville (Willoughby in world premiere of Jon Jory’s adaptation of Sense and Sensibility), Trinity Repertory Company (Proteus in Two Gentlemen of Verona; Laertes in Hamlet), Hangar Theatre (Orlando in As You Like It); and the Shakespeare Theatre of Washington D.C. (Hylas/Dymas in Zimmerman’s remount of Argonautika). Mr. Blanchard also starred as Hamlet in Hamlet and Henry in Henry V for New York Classical Theatre.

In support of new and classic work, Justin starred in the pre-Broadway producer’s workshop of the musical ZORBA, directed by David Leveaux, starring alongside Antonio Banderas and Chita Rivera.

On television, Mr. Blanchard guest starred on Law & Order: Special Victims Unit and the PBS miniseries The Mystery of Matter: Marie Curie. Early television credits include appearances on All My Children, Guiding Light and One Life to Live. He has also been featured in commercials for Oscar De La Renta (Directed by David Fincher) and the MTV: Safe Sex campaign.

On film, he was featured in the major motion picture The Finest Hours (Walt Disney Studios), starring Chris Pine and Eric Bana. He has appeared in the independent films The Middleman, Over There, and Alyssa & Sara.

As a voice-over artist, Justin voiced multiple characters in the widely-downloaded audiobooks for Romeo and Juliet and A Midsummer Night’s Dream. 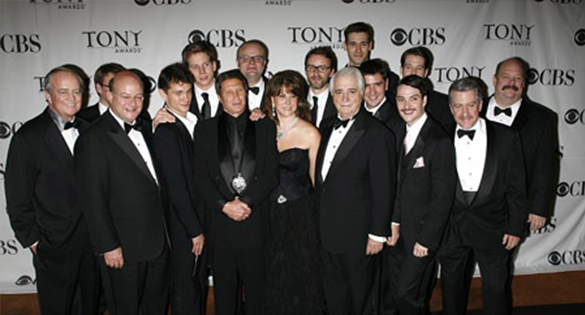 Journey’s End at the Tony Awards Get in Touch With Me